Hey, hey, Live in Montville makes the papers! Big thanks to Rick Koster for this write up in The Day.

And after you’re done reading all about it, listen to Rick and Peter Huoppi’s Leave Work Now podcast – this week’s episode all about The Reducers and the Montville tape.

Hugh has set up a Bandcamp page and has posted a free track “Today” there. Check it out!

“You know, rock and roll like you dream about it” -Robert Christgau, The Village Voice

New London, CT – For more than three decades, The Reducers maintained their stature as regional rock ‘n’ roll legends and tenacious true believers. A raucous live set from 1980, predating their first single by a year, is now available for download exclusively at Bandcamp.

“July 6, 1980, as I recall, was a cloudy, hot, muggy Sunday, the tail end of 4th of July weekend. We were close to two years old as a performing band, so we had some solid sets, and had worked out some of the kinks in our live act” says Hugh Birdsall (vocals/guitar). “We still hadn’t made any records, but we were trying to write our own songs.” Peter Detmold (vocals/guitar) adds, “All of our originals at the time are featured although some would soon disappear from our setlists.”

Sourced from a fan’s cassette recording, The Reducers Live In Montville is a lo-fi treat that presents 35 songs over 90 wild minutes. 11 of those songs are Reducers originals, including 3 previously unreleased original compositions – “BMW”, “Big Time in the Small Town” and “Chip on Your Shoulder”. All three songs make their official debut on Live in Montville.

Peter recalls, “At that time, we hadn’t set foot in a recording studio, and live gig cassettes were all we had to gauge our development” “And this one had the necessary sound, energy and response. The amount of cover material is an indication that we had only just started to write our own material.”

The set kicks off with a powerful take on Generation X’s “Ready Steady Go” and never lets up. Renditions of songs by pub and punk rock heroes abound, including those of Dr. Feelgood, Chris Spedding, The Clash, The Buzzcocks and The Undertones, along with amped-up renditions of ‘60s classics by Tommy James, Johnny Rivers and ? and The Mysterians.

The Reducers Live at Montville is 90 minutes of joyous rock and roll, a reflection of the spirit of an emerging band crafting their sound in a perfect environment.

Hugh Birdsall recalls, “The party’s host, John MacDonald was a friend of our bass player, Steve Kaika (bass/vocals). I didn’t know John very well, but I knew he was a very tough guy. There were lots of wild people there, bikers, punk rockers, a bunch of our friends, and some kegs of beer. So we were in our element.”

Peter adds, “There was always a lot of beer on hand at these Montville shows and things usually got pretty rowdy but there were no nearby neighbors and I don’t remember any cops ever showing up. I think that Joey Lee or someone climbed up in a centrally located tree and set up a boom box to record the show, crowd noise and all. The whole tape is a blast to listen to. I’m glad it survived.”

Great video from our pal Jes Farnsworth. It’s in the blood after all (he’s related to Steve Kaika) but it doesn’t hurt to have musical brothers playing on your tracks too. Keep an eye out for Peter Detmold, Tom Trombley and Roger C. Reale… and hit up Jes’ Bandcamp for the whole “Bring It Home” EP – it’s great!

Long-time Reducers faves Roger C. Reale & Rue Morgue finally get the deluxe Rave On Records reissue treatment. Do not miss out on this one.

“Roger C. Reale knocked our socks off. We’d seen The Clash, we’d seen The Jam, we’d seen Ramones, Hugh and I had already been to England and we’d seen all those bands. And here – in Roger C. Reale with his trio – was the same aggression, the same menace, the same hint of violence like the early The Who thing. And here’s a guy right in our back yard who’s got all the qualities we love and look for in these other bands. We didn’t have to go to England to see him, we didn’t even have to go to New York to see him.

We immediately went out and started looking for the Roger C. Reale & Rue Morgue record. It matched up completely to all the import stuff we were buying. Honestly, I’m sure it gave us the idea that a Connecticut band could make a great record. I’m sure we had thought about making a record but that brought it a little closer to home – that it was doable. It was an important record to us. It was just as important as In The City by The Jam. That’s how good we thought it was.”
– Peter Detmold, The Reducers

Get it at Rave On Records:
https://raveonrecords.bandcamp.com/

Steve Kaika Tribute – In His Own Words

Today is Steve Kaika’s birthday and here’s a nice gift from Bill Dumas. It’s compiled from footage, interviews and outtakes from his Reducers documentary.

Can’t make it to New London next weekend to celebrate the release of Last Tracks and Lost Songs? Order your CD right now at the Rave On Records Online Store. $10 includes shipping to the USA.

“Last Tracks and Lost Songs” collects songs from The Reducers’ last recording sessions along with “lost songs” from as far back as 1989. Most are previously unreleased (including a superb lead vocal from Steve Kaika on Getaway) and every one’s a rocker.

The CD Release Party will be held at the Hygienic Art Park on Saturday, November 29th at 8:00pm. It will feature a listening party as well as video of The Reducers live in Japan. CDs will be on sale at the release party.

You can grab an early copy on Record Store Day, Friday November 28th at The Mystic Disc, The Telegraph in New London and Tumbleweeds in Niantic, CT.

Downloads from iTunes, Amazon and the rest of ‘em will go online a few days later on Tuesday, December 2.

CDs will be on sale on the Rave On Records web site by the end of November.
http://www.rave-on-records.com/

Today marks the 10th anniversary of the start of the Japan Tour.

“Rave On: A Tribute to The Reducers Vol. 1” In Stores Now! 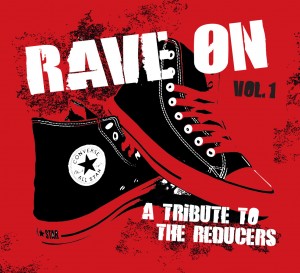 The “Rave On: A Tribute to The Reducers Vol. 1″ CD is in stores now. Hard copies of the CD now available at the following locations:

It is also available as a digital download from:

All profits to benefit the Kaika family. Make sure to pick up a copy!